skip to main | skip to sidebar

Margaret Flockton is an inspiration to many women because she pursued a non-traditional profession, and had a career at a time when few middle-class women worked outside the home. She was also an inspiration to Sir Leon and Lady Trout, because they named a major Brisbane street after her. 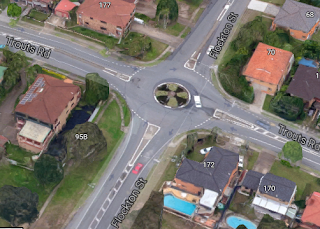 This is busy Flockton Street, intersecting with Trouts Road in the inner suburb of Everton Park. It's a boundary road of what was once a large estate owned by the Trouts, who collected art and were involved with the Queensland Art Gallery.

Pursuant to my research for the Margaret Flockton biography, I’ve known about Flockton Street since 2007. Enquiries I made then at Brisbane City Council as to the origins of Flockton Street’s name revealed only that the street did not appear in 1920 street directories, and was named after 1920 in honour of ‘someone unknown’.

Since Margaret was most well-known through the 1890s and early 1900s, I looked for someone else named Flockton who might have been ‘in the news’ after the 1920s. For a time I wondered whether Flockton Street was named after a distant relative of Margaret’s, the well-known NSW cricketer Ray Flockton, born in Sydney in 1930 and constantly in the news through the 1950s.

Lately, thanks to Zoe Boccabella in Brisbane, I’ve discovered the Trout connection. The Trouts began subdividing their substantial property ‘Everton House’ from the late 1950s, selling off portions for residential housing. The newly-created streets of Everton Park needed names, yet Sir Leon Trout’s profile in the Australian Dictionary of Biography outlines his obvious patronage of artists but makes no reference to him as a cricket fan. A quick check on Google maps for his former landholding uncovers streets with the names of Nerli, Bunny, Cayley, Friend, Heysen, McCubbin, Namatjira, Streeton … and Flockton.

I have no record that the Trouts ever met Margaret Flockton. She arrived from London in Sydney in 1888 and, apart from a year spent in Charters Towers in 1892, she remained in Sydney until her death in 1953. Clearly, since Flockton was chosen by the Trouts as the name of their longest street, Margaret's work represented something special to them.

The history of Flockton Street’s name is now abundantly clear to me. Why didn’t Brisbane City Council know this interesting history of Everton Park when I enquired years ago?

Sir (Herbert) Leon Trout died in 1978 and his widow Lady Peggy Trout died in 1988. The Board of the Queensland Art Gallery then sued her lawyers over her will, claiming that she had wanted to bequeath to the Gallery her collection, valued at $10 million. In June 1989 the Trout collection was offered for auction by Christies, the catalogue listing important Australian paintings and decorative arts. At the auction the Queensland Art Gallery purchased at least one painting, by Nerli.

Brisbane thus missed out on a significant bequest of fine art, unlike several other Australian cities. At the turn of the 20th century Sydney enjoyed the patronage of society matron Mrs Tom Marshall and later received the Marshall Bequest to the Art Gallery of New South Wales. Melbourne’s National Gallery of Victoria benefitted from Alfred Felton and the Felton Bequest. Melbourne has also made much of its artist community centred on Sunday & John Reed, preserving their home Heide as a museum in memory of that era. It seems that Sir Herbert and Lady Trout were Brisbane's uncelebrated equivalents to these icons of Australian art history. There is a great deal of coverage of their activities in the digitised newspapers on the Trove website. Why don’t more Queenslanders know this?

The large home of the Trouts still sits at the end of a long tree-lined driveway entered through tall gates, but the Trout home is now surrounded by modern brick houses. The spot where the property stands is high on a hill and would originally have had sweeping views of the city and out to Mt Coot-tha and the Taylor Ranges. Pictures taken in November 1954 and December 1960 show a single storey structure with a pool. At some stage a second storey was added to the house. Inside the house was an art gallery.

Developers are now seeking approval for the Trout's house to be demolished, creating space to build a number of units. This little bit of history is in danger of being lost. The 'Lost Brisbane' Facebook page is running a campaign to save the house and the daughter of a cousin of Sir Leon Trout has offered to provide more information to help the cause (Beverley Henderson).

As a final touch of irony, Canberra also has a street named after Margaret: Flockton Place, a modest little cul-de-sac in the outlying Canberra suburb of Chisholm. I’m surprised that while both cities quietly celebrate her as an artist, neither the Queensland Art Gallery nor the National Gallery in Canberra has work by Margaret Flockton listed in its catalogue!

Read more about Margaret Flockton in my book 'Margaret Flockton: A Fragrant Memory', available through the publisher Wakefield Press and at good bookshops.
Posted by Louise Wilson at 13:16